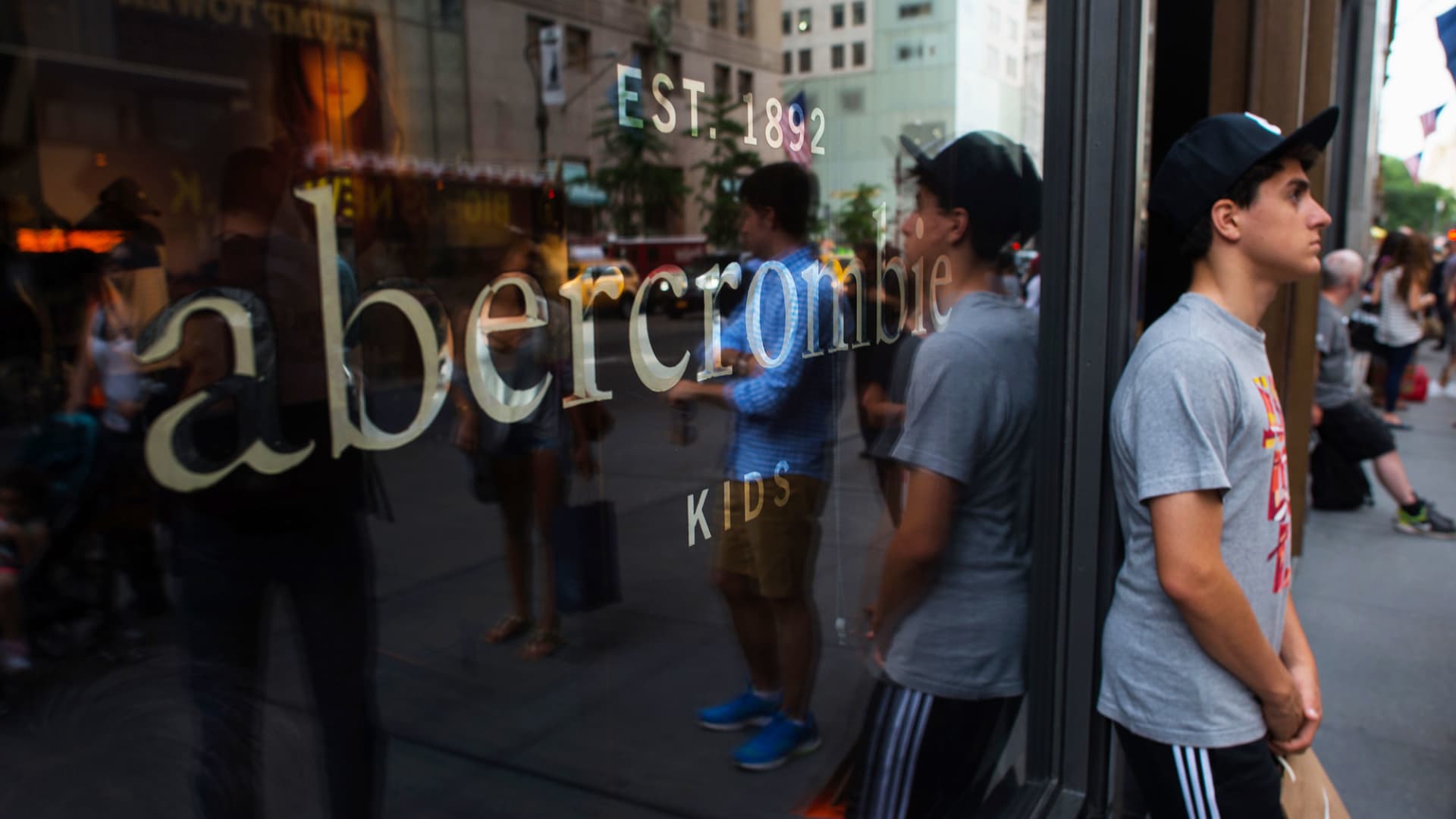 Check out the companies making headlines in midday trading.

Abercrombie & Fitch – Shares of the retail stock jumped 19% after the apparel retailer beat Wall Street’s revenue forecasts for the third quarter and posted unexpected quarterly profit. The company said demand rose for clothing as consumers returned to work and had increasing social obligations.

Disney – The entertainment titan dropped 2.8% as investors continued responding to the dramatic ouster of its CEO. Deutsche Bank reiterated the stock as buy and said it doesn’t see any meaningful changes coming to its direct-to-consumer strategy.

Best Buy – Best Buy’s stock surged 11% after the consumer electronics retailer beat Wall Street’s estimates and maintained its outlook for the holiday period. Demand remains below its pandemic heights, but Best Buy indicated its faring well even as inflation weighs on consumers’ pockets.

Dollar Tree – The discount retailer saw shares slide amore than 8% after the company projected full-year earnings in the lower half of its prior guidance range. The stock slipped even after the company beat top and bottom line estimates for its latest quarter and better-than-expected comparable store sales.

Dick’s Sporting Goods – Shares of the sporting goods retailer jumped more than 8% after the company reported better-than-expected quarterly profit and revenue and an increase in comparable store sales. Dick’s raised its full-year financial forecast as well.

Medtronic – The medical device maker’s stock dropped 6% after it missed on revenue expectations while slightly beating on earnings per share. The company said it was hurt by the surging U.S. dollar and a smaller rebound than expected in procedures that involve its equipment.

Dell – The technology maker added 5% following its report that showed it beat estimates for the third-quarter but had a weaker than expected current quarter revenue forecast. The company said consumers would be pinched by the slowing economy and inflation.

Coinbase – Shares of the cryptocurrency exchange rose 2% with the broader markets. Bitcoin turned positive after briefly touching a two-year low. Coinbase’s stock price tends to trade in tandem with the bitcoin price, partly because of its heavy reliance on trading revenue. The crypto market is also shrugging off fears about the potential damage to come in the wake of the FTX collapse. Several crypto equities were higher midday Tuesday.

BP – Shares of the oil giant gained 4.7% following an upgrade to buy from neutral from Citi, which said it has good valuation and free-cash flow yield while also likely being able to differentiate itself from European competitors.

Airbnb – The vacation rental platform shed 1.3% following a downgrade to neutral from outperform by Baird due to concerns over tightening consumer spending.

Walgreens Boots Alliance – Shares gained 2% following an upgrade to outperform from market perform by Cowen. The firm said the market is putting too much attention on Walgreens’ retail business, saying the stock could rally more than 30% as the company transforms its health-care services business.

Toll Brothers – Toll Brothers’ shares gained 1% after JPMorgan upgraded the stock to overweight, saying that the homebuilding stock trades at a discount to its peers.

ObsEva – Shares of the biotech company soared 20% following news that it sold its rights to ebopiprant, a potential treatment for preterm labor, to XOMA. The company got $15 million up front with potential future milestone payments that could bring an additional $98 million.

Nvidia and Advanced Micro Devices – The tech companies added 3.2% and 2.1%, respectively, after BMO reiterated both stocks as outperformers and said they could see “outsized” share gains.

Urban Outfitters – Share of Urban Outfitters rose 5.8% after reporting third-quarter revenue on Monday that beat Wall Street’s expectations, although its per-share earnings were slightly below estimates. BMO Capital Markets and Telsey Advisory Group both boosted their price targets and maintained their ratings of market perform and outperform, respectively.

Agilent – Shares of the life sciences company gained 7% after it reported beating expectations for the latest quarter as all of its business units increased sales.

AgroFresh Solutions – The chemical company focused on preventing food loss added 5.4% following an announcement that it was going to merge with Paine Schwartz Partners. All of AgroFresh’s outstanding stock will be obtained for $3 per share, which is 7.5% higher than where it closed Monday.

Defying forecasts, crude oil prices have wiped out most of this year’s gains and could head lower

Stocks making the biggest moves in the premarket: Apple, Taboola, Biogen and more